Don Waful is pictured on the right with Chancellor Kent Syverud at the 11/2/14 Syracuse football game. Waful is one of Maxwell’s oldest alumni, earning degrees from both the Maxwell School and Arts & Sciences. He has had many claims to fame: a World War II POW camp survivor, veteran trombonist, longtime president of the Syracuse Chiefs, and the subject of a recent musical. An avowed Syracuse football fan, Don has missed only four home games since the ‘40s and has never missed a home game in the Carrier Dome. What’s even more astonishing is that he still drives himself to almost every game! Maxwell is extremely proud to call Don Waful our alum.

The University Bookstore will have books to purchase.

Matthews, a 1977 MPA graduate, is the new president/CEO of the Columbia Association.The Columbia

In addition, Matthews previously held positions as city manager, assistant city manager and director of finance and administration for the city of Webster Groves, Mo. 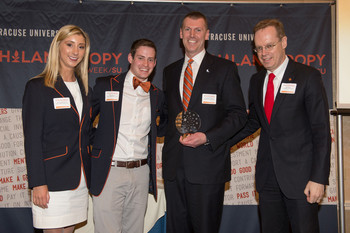 In all its activities, the Maxwell School empowers passionate, capable people whose lives are committed to public enterprise — whether as practitioners, experts, or citizens. Like the School, they abide by a notion that when communities work together, with a sense of shared purpose, the results are beneficial for all. SU’s recent Orange Circle Awards highlighted Andrew Lunetta and Christopher Meek who are representative of the many Maxwellians striving to make the world a better place through public service. To celebrate that notion, the Orange Circle Award recognizes altruistic members of the Syracuse University community who have done extraordinary things in the service of others.

The third annual Phanstiel Lecture and Orange Circle Awards, held on April 2, 2014 at the Sheraton Syracuse University Hotel & Conference Center,  was one of the highlights of Philanthropy Week at SU.  The lecture is named in honor of Howard Phanstiel ‘ 71 MPA/’70 BA PSc and his wife, Louise,  who gave the Maxwell School $5 million in 2006 to bolster the training of public leaders in the wake of Hurricane Katrina. The gift, one of the largest gifts by an individual in Maxwell School history, funds the Howard and Louise Phanstiel Chair in Strategic Management and Leadership—created to solidify the Maxwell MPA program’s top national ranking and its training of public managers.  The Phanstiels also support Syracuse University students through a generous scholarship fund that assists middle-class students and they helped fund the Carmelo K. Anthony Basketball Center.

The keynote lecture at the Orange Circle Award featured Maxwell MPA candidate Andrew Lunetta, founder of Pedal to Possibilities, a program that offers Syracuse’s homeless and underserved group-bike rides and the opportunity to earn their own bicycles. Lunetta has worked closely with the city’s homeless for the past five years, first while studying at Le Moyne College and working for Catholic Charities at the Oxford Street Inn homeless shelter and the Brady Faith Center.

In 2012, he opened a home for men making their way out of the shelter system, and currently lives there with the men as he pursues a master’s degree in public administration from Syracuse University’s Maxwell School. During his presentation, Lunetta talked about his work with the homeless, the impact he’s made, and the profound mark those experiences have left on him. 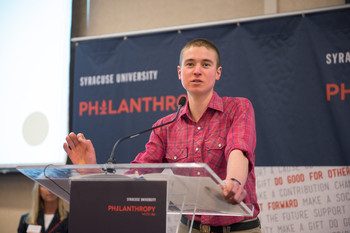 This year’s honorees for the Orange Circle Award, which honors individuals who make a difference through service, included Maxwellian Christopher Meek, ’92 BA PSc/Econ, who is tirelessly dedicated to helping American troops and veterans take their next steps forward. SoldierSocks, the nonprofit he co-founded in 2009 with close friend Scott Duffy, focuses on identifying and filling gaps in the traditional systems supporting members of our military. 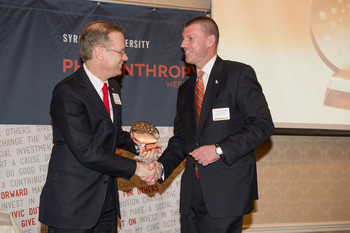 The name of the organization stems from Meek’s first project. Stunned by the fact that our “boots on the ground” in Afghanistan were short of good socks, he sought out donations from communities and businesses, while also creating a nonprofit organization to pursue effective fundraising for the delivery of donated supplied to the troops. Today, as the chairman of SoldierSocks, Meek is broadening the organization’s mission to helping veterans transition into rewarding civilian careers. The organization has made a monetary commitment to the Maxwell School at SU, as well as to Georgetown University, to fund scholarships for veterans to continue their educations after their military service.

Most impressively, Meek and SoldierSocks are helping veterans who have been injured in the line of duty to walk again. His organization has partnered with Ekso Bionics Company, a manufacturer of bionic exoskeleton suits, to raise funds and donate suits to as many paralyzed U.S. veterans as possible.

Robert Magliaro is an Assistant Principal at The Urban Assembly School for Emergency Management in New York, NY. Rob completed his B.S. in Economics, International Relations, and Policy Studies at Maxwell, graduating in 2008.

Shannon Fitzgerald O’Shea is currently a Programme Specialist in the Post-2015 Development Agenda Unit in the Office of the Executive Director at the United Nations Children’s Fund (UNICEF). Originally from Berlin, CT, and now residing in New York City, Shannon holds an MAIR from the Maxwell School, as well as a B.S. in Broadcast Journalism from Syracuse University’s Newhouse School of Public Communications.

In July, Dorji Choden ’01 MPA was appointed by His Majesty the King of Bhutan as Bhutan’s

first woman minister and the minister for the Works and Human Settlement. During her two-decade tenure as a civil servant, Choden represented technical and gender issues at the national, regional and international fora.

Richard Wilson is the Port Director for Port of Anchorage, Alaska. He earned his MPA from the Maxwell School in 1968, and also holds a BA in government from Pomona College. A native of San Diego, CA, Richard has lived and worked in Anchorage, AK since 1974.

The Port of Anchorage serves as the gateway for most of the goods coming into Alaska – 90% of the consumer goods for 85% of the State.  As a “landlord port,” it provides planning, financing, development, operations and management of land, docks and support services for 450 container ships, bulk petroleum tankers, tour ships, military deployment and Coast Guard ships, and barge vessels. The Port is an enterprise entity owned by the Municipality of Anchorage, in contrast to the port authority model, with the Director appointed by the Mayor and subject to municipal code. The entity operates on internally generated user fees, and funds the capital budget from Port bonds and state and federal grants.

Currently, Richard is involved in the Port’s project to replace aging docks and add berthing and uplands through investments on the order of $700 million. In his role, Richard has plans for a Business Development Plan and a Master Plan Update to help the Port remain efficient, and strategically select facility improvements. Additionally, the Port is working with the petroleum and hydro power industries to offer logistical support to energy projects throughout Alaska and the Arctic Ocean.

In Richard’s previous role as the City Administrator of a tiny community in the Bering Sea, St. George Island, his community was honored with the “All-America City Award” – the first American Native community to win it! Other tales Richard has to tell of his career and life experience in Alaska? “Oh yes, I did the “Deadliest Catch” thing on a crabber named “Progress” one winter and lived to tell the tale…”

When asked about his most memorable Maxwell experience, Richard shared, “Professor Spencer Parrott, in his Administrative Law class in the mid 1960’s, must have sensed some of us were experiencing an identity crisis.  One day he commented:  ‘All you students! The new generation filled with lofty goals. Did you ever consider that if you had lived fifty years ago, a good number of you would not be going to Maxwell – you would be heading for careers as ministers and such!’ It was an ‘a-ha!’ moment validating my own deep motivations to serve my community and the world.”

Richard’s main advice for current students and others embarking on their careers: “Allow yourself to follow more than one path in life to discover how rich it can be as a citizen of the world.”

Richard can be contacted at richwilsonak@gmail.com.